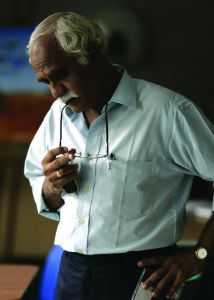 Raghavan is a Chartered Accountant who established a highly successful computer software consulting business in Bombay. Inspired by a period of national service he undertook as a young man, working in slums in Mumbai, he harboured a dream to do something about the vast untapped educational potential among India’s poorest citizens.

With his wife Aruna, he went on to establish The Anugriha Charitable Trust with the intention of evolving and demonstrating alternative educational methods in India.

Shikshayatan School opened in mid-1994 admitting 15 3-year-old children to the first class. All of the children were drawn from low income, scheduled caste families in which they are the first generation to receive any education. Within this community, the Raghavans have spent the last two decades exploring and experimenting with new methods of early childhood education.

In 2004 they met with Room 13 and were inspired by a presentation given by two youngsters from Scotland. Confident by this point in their ability to instil the skills of literacy and numeracy in their pupils, they felt intrigued by an approach to arts education that appeared to sit so comfortably with their own methods. From this point Shikshayatan enthusiastically embraced Room 13. Since then, both Raghavan and Aruna have provided wise council and practical support which continues to aid and motivate the development of Room 13 International. 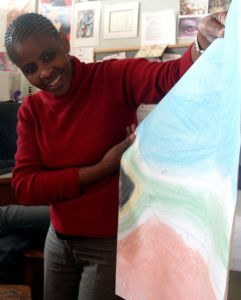 Phola Tabane is Principal of Sapebuso Primary School, Soweto, one of the first schools in South Africa to adopt Room 13. On a fact finding visit to Scotland in 2006, which she made along with artists and other educators responsible for establishing the Room 13 network in that country, Phola declared Room 13 an unstoppable force that was already changing the lives of children in Africa just one year after its introduction.

As an educator and dedicated figurehead of the community, Phola has been instrumental in the process of instigating a firm foundation for the South African studio network. Her assured reporting of the benefits Room 13 brings to her pupils has gone a long way towards instilling confidence in her staff and those of other schools for whom Room 13 may at first appear a daunting prospect. Her encouragement and pride at her own pupils’ endeavours and support for their Artist in Residence has enabled them to make extra-ordinary achievements in the five years since their studio opened its doors and ensured that they can – in their own words – live their dreams by being a part of Room 13.

“I look forward to continuing and developing Room 13 within our schools as well as building upon its growth and success. It was the greatest honour for me to be selected as one of the Room 13 International board of trustees. My wish is for Room 13 to continue spreading internationally; and that means hard work from all of us.”