Welcome the Big Room 13 Blog featuring the latest news and events, from our studios around the world. Look out for new studios, inspirational images and ideas drawn from from our digital scrapbook, informative articles and much, much more.

‘——– came up with an idea to produce an image of a tablet with a blank screen that could be drawn into.  After talking to me about it we thought it could be an interesting product that we could sell at one of the making days.  ——– took care to draw in the keys in the right order before I suggested that the keys could spell out an instruction like ‘draw your own image in the screen’.  She didn’t like the idea but decided she would poll everyone else in the room as to whether they preferred hers or mine.  She ended up deciding that mine was a good idea and that she would go with that. She also produced several quick, gestural line drawings in a range of media (all black, eg charcoal, pastel, paint) of smartphones and tablets.  She worked hard to cut these out to produce an image easily translatable to screenprinting.’

This summer, Room 13 Community studio offers a unique experience to individuals who are interested in the mix of creative and business based activity.

This block of workshops will introduce you to working with a team of artists and entrepreneurs in a studio environment to focus on the process behind realising a creative idea. It will provide you with the opportunity to think and experiment with the design process and put into practice a working method that aims to take you from idea to finished product. This will inform your wider artistic practice and develop your business thinking.

During the week’s workshops you will share the studio space with professional artists and business people who will help to develop your ideas, thinking, and as part of a team, create a brand to produce products to market at an event held in the Room 13 studios on the Saturday and throughout the local area. 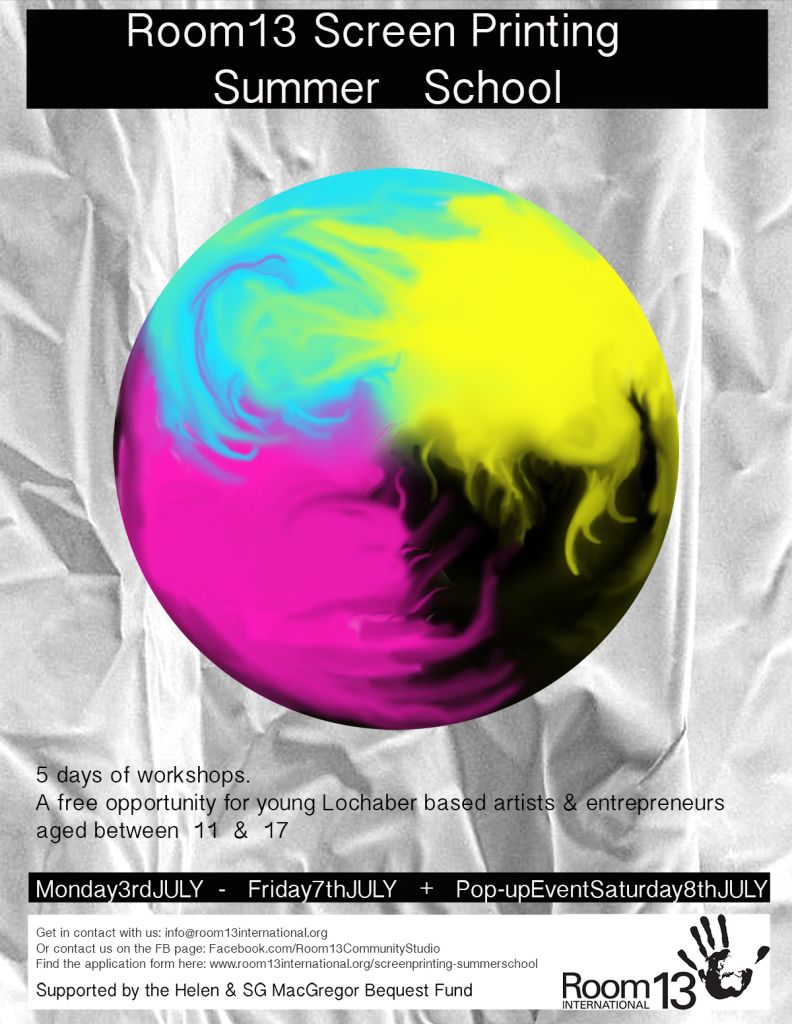 Notice of AGM & Appointment of Board Directors

Room 13 International is looking to recruit individuals with a range of skills and expertise to serve on our Board of Trustees.

Currently, Room 13 International is working to consolidate our existing provision locally, while also supporting the development of the Room 13 organisation and network. Through operation of our studio facilities in Lochaber, we aim to set the standard for other communities across Highland and provide a framework that can be applied worldwide.

If you think you have the time and skills to assist us in developing the necessary structures to run a worldwide organisation effectively from our Highland base whilst remaining principally artist led, youth powered and promoting strong links with the surrounding community, we would love to hear from you.

Please Click here for more information or come along to our AGM to us find out more.

We are sad to report that our art collection and archive, both of which date back to the beginnings of Room 13 in 1994, have been badly damaged by a flood of sewage in our premises at The Window, gallery and project space in Caol Shopping Centre.

The flood, which happened early in the New Year, was the result of a blockage in the drain further down the street.  Under a build-up of pressure, sewage was forced out through the toilet in Room 13’s premises at the end of the block, covering much of the ground floor.

We would like to thank the local representatives of Scottish Water, who attended very quickly to remove the blockage. They also assisted and gave advice in dealing with the aftermath; as a result of their help it has been possible to contain the problem and assess the damage.

The art collection – canvases, works on paper and framed works, plus archive material, papers and photographs documenting Room 13 since its beginnings in 1994, were being temporarily stored in the Window following the emptying and demolition of Caol and Lochyside RC Primary Schools.  The majority of works in the collection were created by young artists in Caol and Lochyside Primary School Room 13 studios between 1994-2016.  Among the works were several large scale canvases that had previously been exhibited in major galleries in Scotland, and across Europe.

The Room 13 team and Board are horrified by what has happened and deeply upset at the loss of an invaluable and irreplaceable asset.

Room 13 International CEO Claire Gibb, has been involved the project since she was a teenager and witnessed the creation of many of the artworks, now lost, said:

“It is heart-breaking that so much of Room 13’s history has been destroyed. This is going to be met with huge disappointment and sadness, not just by the community of Caol who take such pride in the work these young people have created over the years, but our worldwide community who have followed and supported our progress for years.”

“We are taking advice from professional cleaning and restoration experts as to how many of the works can be saved. This is a case of appalling bad luck and bad timing. Up until a few weeks ago these works, which have been exhibited to international acclaim, were hanging on the walls of local schools.  A comprehensive cataloguing of the collection was due to take place in 2017, with plans underway for key works to be hung in public spaces throughout the town.”

A full statement about the status of the Room 13 collection will be issued once the assessment of damage is complete.

We are thrilled to have received an award from Big Lottery Young Start Fund in support of our new ‘Generation Creative’ project.

The aim of ‘Generation Creative’ is to extend the benefits of participation in Room 13, and deliver our cornerstones of creativity, enterprise, arts and philosophy to greater numbers of young people in the Lochaber area, many of whom haven’t been able to access Room 13 previously.

The £49,490.00 award from Big Lottery will ensure the fantastic new Room 13 studio facilities in Caol Joint Campus are used for the wider benefit of the community, with a key focus on developing young people’s creativity throughout the region. This project will enable our lead artist Richard Bracken to work with children and other contributing artists to develop a programme of delivery for primary and high school students, starting January 2017 and continuing throughout the academic year 2017/2018.

In the course of this project, Room 13 will work with 10 primary schools in the Lochaber area to provide opportunities for children to work alongside professional artists and develop creative projects based on their own ideas and initiative. We will also develop and extend our youth volunteer group (aged 13-21) to involve students from the four local High Schools enabling them to develop their own ideas and projects, gain experience and build an understanding of the economic prospects of a career in the creative industries.

Confident – children and young people have more confidence and skills.

Enterprising – Young people are better prepared for getting a job or starting a business.

‘The support from Big Lottery is a really valuable investment in Lochaber’s Room 13 studios. It will allow us develop key aspects of our work with schools and young people at a time when there is more demand than ever for the sort of services our artists and studios can deliver,  with less and less provision to support this work. We are looking forward to getting ‘Generation Creative’ underway!‘