A Mosaic for Maddie

Room 13 Aragon have just completed a commission by their school to design, create and install a large mosaic in honour of Maddie Thompson, much loved and missed pupil of the school and Managing Director of Room 13, who died, last October aged just 10. 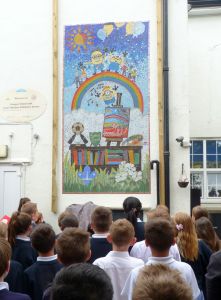 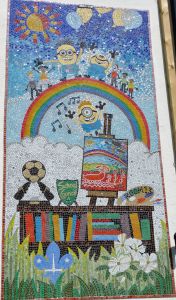 The whole school community got involved in the creation of the mosaic and the process is recorded in this short film, which like the mosaic itself is full of joy in celebration of the life of a young girl.

More about Maddie Thompson, and the legacy of her life and death in the community of Aragon Primary School in this piece written by Artist in Residence Louise Frewin in Room 13 studio network blog:

We would like to extend heartfelt sympathies to the pupils and staff of Aragon Primary School, and most especially to the family and friends of Maddie Thomson, who tragically died very suddenly on Thursday 23rd Oct following a brief but very serious illness.

Maddie had been fully involved with Room 13 since Year 3, having started coming to the studio as soon as she was able. At work and in meetings she was quiet and conscientious, not always saying a lot but what she did say was always extremely wise. Around her friends, Maddie was funny and boisterous, a lively and popular presence in Room 13.

As well as being Managing Director of Room 13 since Sept 2013, Maddie was a prolific artist. She had been busy making work for an exhibition in a local gallery at which Room 13 Aragon was to show work along with other Room 13 studios in the region. The exhibition is scheduled for early December, and will go ahead in Maddie’s honour.

Maddie also contributed to a recent project in the studio, designing a Moneybox which has been touring the world raising funds for Room 13 International.

The children of Aragon Primary have been expressing their grief with tributes and messages to Maddie, who was popular and involved in many aspects of school life.

We are profoundly sorry for the devastating loss suffered by Maddie’s family and friends at Aragon Primary School. This sad news will be felt deeply by the Room 13 community around the world and we know many artists of all ages and will want to extend their condolences and respect at the loss of one of our young emerging talents at such a tragically young age.

Any messages of condolence can be passed on to Maddie’s family via Louise Frewin, Artist in Residence at Room 13 Aragon, or by e-mail via Room 13 International.

A set of beautiful custom made moneyboxes are currently touring the world to raise funds and support for Room 13 International!

The Room 13 World Tour is the latest fundraising initiative organised by TBWA.

TBWA Tiger Academy is a global training programme run every year for 40 of the company’s young and most promising employees. Every year, the TBWA Tigers are tasked to come up with an entrepreneurial and creative project to raise funds for Room 13 International.

This year, the TBWA Tigers commissioned Room 13 studios to design and create a unique artwork that would also serve as a moneybox to travel the world raising awareness and money for Room 13 International. The proceeds are directed to the Rod Wright Bursary Fund, introduced by the trustees of Room 13 International in honour of our founding Chairman, and will be used to support entrepreneurial and creative projects put forward by Room 13 studios. 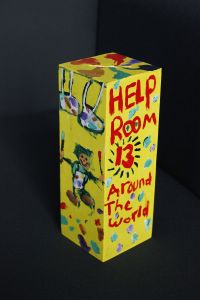 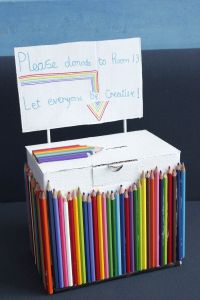 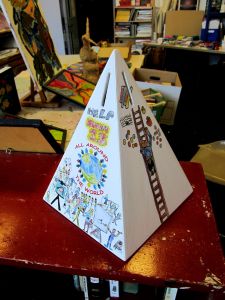 Room 13 studios in Scotland, England, India and the USA put forward designs and created the 5 artistic pieces you see below. Each of these is now on a route around the worldwide network of TBWA – from Europe, to the America’s, Africa, Asia and the South Pacific.

Inspired to donate? Please do!

This exhibition from Room 13 Aragon at Caffe Bernardo runs from the 30th of April until Saturday 25th of May.

All welcome at the Family Day on Saturday 4th of May.

There is also an open studio day at Room 13 Aragon lined up for the 22nd of May.

If you’re in the area, please do come along and introduce yourself!

Room 13 studios were invited to contribute to ‘Our Children on Water’ exhibition organised by the Royal Society of Chemistry. Among those whose work was selected by RSC for exhibition were artists from Room 13 Aragon, Room 13 Tomintoul, Room 13 St Martin de Porres, and Room 13 Kwacutshwayo.

Room 13 Aragon made a big impression with their first commission. In 2007, a group of young artists from the studio painted a car, which went on to compete in the Mongol Rally. 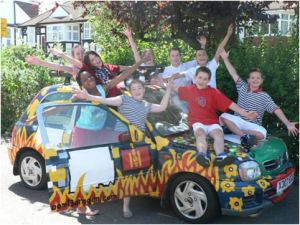