Today is the 20th anniversary of Shikshayatan School, now home to Room 13 Shikshayatan. Aruna and Raghavan, who founded the school in 1994, held the first classes around their kitchen table. They are to be congratulated for their energy and vision; not only building the school facilities brick by brick, but allowing the children access to an education of the highest standard.

They established The Anugriha Charitable Trust with the intention of evolving and demonstrating alternative educational methods in India. Shikshayatan School opened  on 15th August 1994 admitting 15 3-year-old children to the first class. All of the children were drawn from low income, scheduled caste families in which they are the first generation to receive any education. Within this community, the Raghavans have spent the last two decades exploring and experimenting with new methods of early childhood education. They have grown and developed the school year by year, striving to keep pace with the requirements of their students, resolute in their aim of providing free education to the under-privileged. Expanding its capacity gradually from pre-school to primary and then to middle school, Shikshaytan now gives an education, uniforms, textbooks and snacks to 225 students, on a four-acre, green campus, without charging a single rupee.

In 2004 the Raghavans met with Room 13 and were inspired by a presentation given by two youngsters from Scotland. Confident by this point in their ability to instil the skills of literacy and numeracy in their pupils, they felt intrigued by an approach to arts education that appeared to sit so comfortably with their own methods. Room 13 Shikshayatan was introduced to the school in 2005, and has since been host to a number of visiting artists. Children and teachers from Shikshayatan School on a visit to Scotland for Room 13 International Summer School, 2009

Room 13 Mallaig have learned to make these fantastic bags made from used plastic. The technique was picked up by their artist in residence who spent some time working with Room 13 Shikshayatan last year. This is an excellent example of studios sharing techniques across the globe to make some products that they can either exhibit or sell, once the
Mallaig artists have mastered the technique there might be some available to buy right here on the Room13 International website.

Congratulations to TBWA\ Moscow, winner of the 2009 Carbon Neutral Challenge. Their achievement is marked with this beautiful trophy commissioned by TBWA\ and designed by the young artists of Room 13 Shikshayatan. 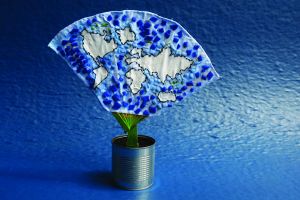 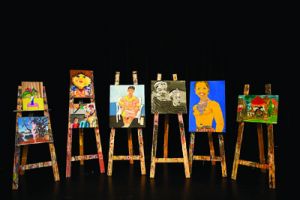