The story of Room 13

In 1994, artist Rob Fairley began working with pupils at Caol Primary School in Fort William as part of his residency with Highland Council.

Finding that the students, who were aged between 9 and 11, lacked confidence with drawing, Rob gave them some disposable cameras. The students roamed the school in pairs and were allowed to use half the film in the camera each. After a couple of weeks, the students were hooked. They cleared out a cupboard to create a makeshift darkroom and began to experiment with taking and printing their own images.

As Rob’s residency came to an end, he informed the children that as the project was finishing, he wouldn’t be coming back next term. Disappointed, they asked what they could do to continue their work with him. Fairley explained that he had been paid by the local authority to be there but that that had now ended. The only way he could come back would be if they were able to pay him for his services. 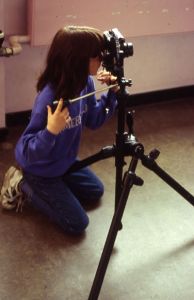 This inspired the young photographers’ first professional assignment – they took charge of the school photographs for that year. They photographed every child in the school then developed, mounted and sold the pictures to parents. When, triumphant, they presented their hard earned profits to Mr Fairley he was astounded!

Instead of accepting payment, Rob suggested that they invest the proceeds in a camera of their own and agreed to stay on and work with them as a volunteer. With this agreement, Caol Camera Club was formed!

Rob Fairley worked with pupils at Caol Primary once a week for the next five years. In that time, the original members of the Camera Club moved on to high school, but there were plenty of younger students coming up the school who were just as keen to develop their artistic skills. 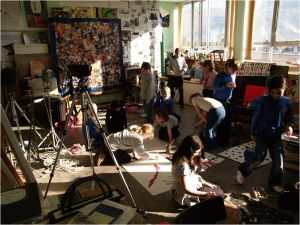 It wasn’t long before the artists were given their own home in the school – Room 13. From the start, Room 13 was a place for individuals to come of their own accord to work on art pieces of their own invention. Under the example set by Fairley, there was a great emphasis on traditional skills of seeing and drawing and also, crucially, how to think. Instead of being taught how to draw, in Room 13 artists were encouraged to look and to think hard about everything and anything, and to use drawing as a tool to investigate and realise rather than a means of reproduction.

As the young artists grew in confidence, their aspirations grew and with that their skills and reputation. They began to attract small local commissions – Christmas cards, banners, a public mural – from which they gained funds which were then promptly reinvested in equipment or supplies for their studio. As the studio business began to develop, the young artists in charge formed a management team and opened their own bank account.

Everyone in the school began talk about the exciting stuff going on there, and Room 13 became the place to go. Now, every single studio throughout our network proudly carries the Room 13 name, regardless of whether they are classrooms, sheds, or laboratories.

In 1999, the management team successfully negotiated a Scottish Arts Council Young Person’s Award, which allowed the studio to employ a second Artist in Residence and develop a year round programme of activity.  It was around this time that wider explorations of art history, philosophy, science and all aspects of contemporary arts began to filter into the everyday life of the school community as the students became more engrossed in their learning and the lines between Room 13 and ordinary classwork became blurred.

Building on this, in the year 2000 Room 13 made the leap to become a full time studio… and though the funding was not everlasting the commitment of the artists and dedication of the young people involved has proved to be so, and as a result, the project has never looked back! 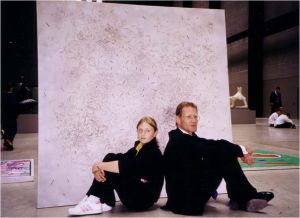 On September 11, 2001, Jodie, a pupil at Caol Primary School, stayed at home because she wasn’t feeling well. Along with the rest of the world, she watched with horror as the attacks on the Twin Towers and the Pentagon unfolded on television. The next day she went into Room 13 and announced that she wanted to make an artwork that would “always make everybody want to cry”. A year later, Jodie’s poignant canvas – featuring 3,000 burnt out matches, one for everyone reported to have died in the attacks – was hanging in London’s Royal College of Art. It was part of a body of work from Caol which had been awarded a national children’s art award, The Barbie Prize. Billed as the junior equivalent to the Turner Prize, it was a great honour to be proclaimed the winner of the Barbie prize. The artists and their work featured in national and international media, and Room 13 found itself the subject of public interest far beyond its home in the Highlands of Scotland.

What Age Can You Start Being an Artist?

As an art studio, Room 13 now had a reputation for producing outstanding original works. As a movement within education, the project in Caol Primary School was now beginning to attract interest from other schools. The management team were only too happy to encourage and assist students from other schools in setting up their own studios – they firmly believed that every school should have a Room 13! 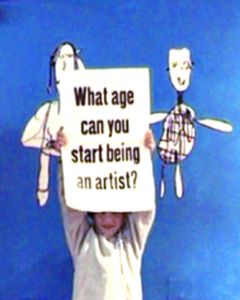 In 2003, Room 13 won a £200,000 award from NESTA to expand the project into other schools. The first Room 13 outside Caol was set up just around the corner in Lochyside RC Primary School. Soon after, a group from Hareclive Primary School in Bristol came up to visit the Caol studio, and, before the afternoon was out, had decided to set up their very own Room 13. With a little help from NESTA, a Room 13 network was beginning to form.

In the same year, artists from Room 13 in Caol worked with ZCZ films and Channel 4 to produce a documentary called What Age Can You Start Being An Artist? When the programme was broadcast in January 2004, one of the people watching at home was a man called Rod Wright. Rod was a director of TBWA\, a global communications company. He had been developing plans to put his company’s resources to use by teaching creativity to under-privileged children in 65 countries worldwide. Excited and intrigued by what he was watching, Rod made contact with the ten-year-old Managing Director of Room 13 Caol to ask for their help and advice in developing his programme. They struck up a correspondence, and in the end, Rod was persuaded to hand over his plans for creative education to Room 13.

A group of students from Lochaber High School had led the way in developing international links for Room 13 some years earlier, when they organised the first Room 13 expedition to Nepal in 2000. As young artists and studio managers at Caol Primary School, the group had been inspired by stories and pictures of the country shared by their Artist in Residence Rob Fairley, who also an experienced mountaineer. As children, they were always eager to accompany him on his next expedition! Rob agreed that if they were still keen to visit Nepal when they were older, he would take them. Of course, they never forgot this promise and by the time they reached S3, the time came to hold him to his word. They raised funds and travelled to Nepal during their Easter holiday to volunteer as visiting artists in a school in Kathmandu Valley.

This led to the introduction of Room 13 in HCMC Orphanage, Kathmandu. Over the next few years, further youth expedition teams travelled to Nepal and India to share their experiences and encourage schools to take up the idea of Room 13 for themselves. 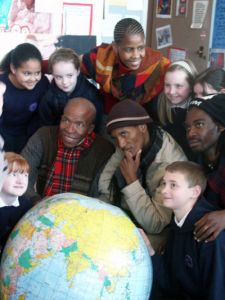 By 2005, Room 13 Caol had become the global headquarters for a network of 10 Room 13 studios in the UK, England, Nepal, and South Africa. In many places the expansion was helped by support and resources from TBWA\ offices worldwide, as Rod Wright and the Caol management team worked closely together to realise their shared vision of creativity for all.

In 2007, Room 13 celebrated its 13th birthday. The organisation was registered as a company, and began the process of becoming a charity. Room 13 International is run by a dedicated team of artists, educators and creative thinkers some of whom are – gasp – adults! At first, this caused concern. Putting adults in charge went against everything Room 13 stands for. Soon though, it became perfectly obvious – the adults are there to do the boring bits like measuring, reporting and filling in forms, while the students continue to run the studios and make art, untroubled by such petty demands.

With more than 80 studios across the world, the Room 13 network is bigger than ever. Room 13 International oversees the development of the Room 13 concept as it expands to other schools, other countries and other cultures. The network is diverse, but Room 13 ‘feels’ the same wherever it is, thanks to the principles all the artists share. Because of Room 13, thousands of young people all over the world have been given the opportunity to become artists, thinkers, and entrepreneurs. We are proud to remain true to the aspirations of the artists in Room 13 Caol who decided that every school should have a Room 13. 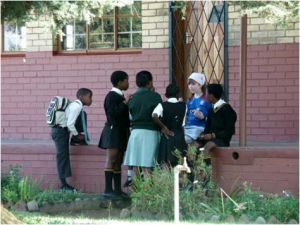 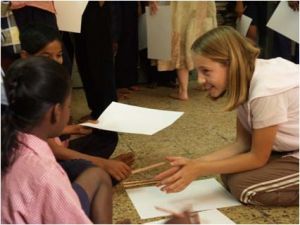